Frames Captured from Camera are Upside Down

Hello, I made a basic application that collects frames from Camera and write these on Disk as jpg images. My device is Nreal Light DevKit.

Well, I am able to collect and write frames successful but captured images are unfortunately Upside Down

In particolar, I made the following modification into the “Update()” method of the class:

This one was the only modification I made. (Scene remains in her default settings)

As side note, I specify that Unity Project was configured following Nreal Official Guide (Quickstart for Android - NRSDK Documentation) and Unity version that I use was “Unity 2019.4.26f1”.

Does anyone have any idea about the issue ?

Hello, I also tryed this method to capture image and I had the same problem did you find any solution ?

(Otherwise, another way to capture image is to use the same method as in the demos scene RGBCamera-Capture, with this the capture is not upside down)

Hi developer, the image is reversed because the origin of the pixel is different in Unity and OpenGL, and in the RGBCamera-Capture demo, we use shader to flip it backwards in Y and the image direction looks normal. 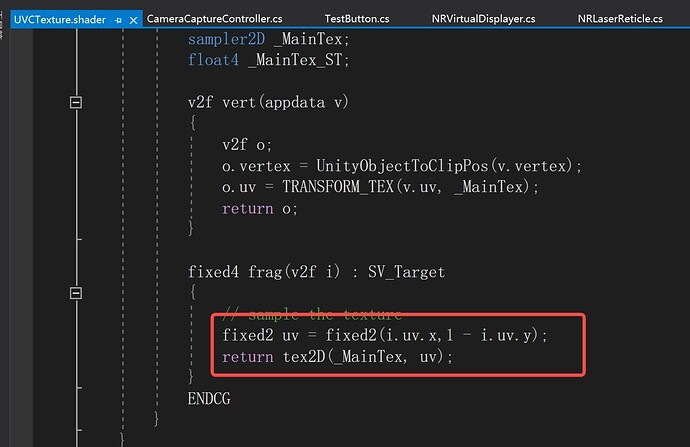 Similarly, during your development, you can flip the image carrier like RawImage up and down with shader.