Disappointing on NReal Decision to Support only MacOS First.

I have no idea why nreal try to support ONLY MAC before supporting Windows with Nebula. I have been waiting for over two years for Windows Nebula support. However, I am really upset that nreal decided to support only macOS Nebula recently.
Nebula for Mac + Nreal Air - Nebula - Nreal Community Forum.
Nreal App - 不止眼前一亮 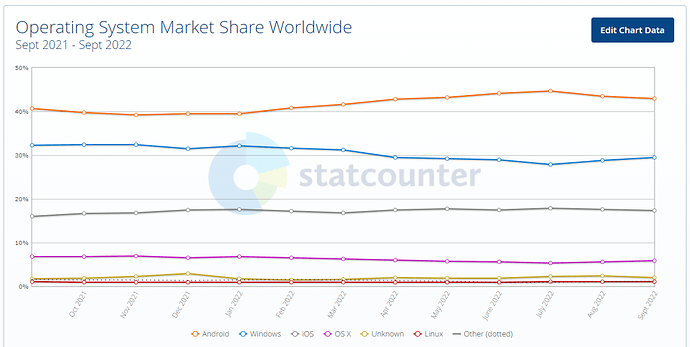 image1182×595 99.5 KB
Windows laptops and desktop has a significantly larger pie than MacOS in the industry area, therefore it is logical to support Windows first. Windows currently has a 5 times larger pie than MacOS. I really cannot understand how they decide in this way. I always think if I can use the Nreal light on my daily work, then it could helps my job a lot faster.

If nreal do not try to support various OS, then at least they have to go public with USB device protocol for community development. Also this closed source policy and selecting the wrong OS for the main platform leads nreal to fail competition with many rivals. At least, at this point, I cannot find any great alternative of nreal in this price tag, therefore I strongly support nreal to improve their SW supports on Windows.

Nreal air is awesome HW, but stupid SW decisions make the great devices into just an expensive toy. I really hope nreal can improve their SW support and decisions. I see so many struggles on nreal’s SW improvements during last two years. They always late on SW schedule (mostly they don’t even have deadline of bugfix and feature improvements.). Therefore I strongly assume nreal’s SW development ability does not meet the requirement. I understand it is very hard to keep various SW such as Toolkit, Drivers, Platforms in same time. However, then they had to think about how to solve the lack of ability!

We need easy to use, simple to port Nreal SDK for various platform.

We need at least Open Source device driver of Nreal, and USB protocols for control the device. Without specification of protocol of Nreal Light/Air, I think it is mostly impossible to use this cool HW in various platform such as Linux, Windows, and iOS.

I cannot find any documentation about this kind of protocol and specification in their document. And also the API does not provide any details about this, and the API is not portable since it implemented for Unity.

I hope Nreal getting better in later days.

I can only agree with the previous speaker and cannot understand the corporate strategy.

Your hardware is by far the best on the market, and requires only a few entrepreneurial strategic direction (okay and budget :))

In my opinion, there are 3 factors that are important for the absolute success in the coming period (by the way, business development is exactly my job for which I am paid)

Actually my tip here would be to sell shares to Sony or Samsung who have decades of experience in the international market, and do it like MUSK and build rockets or chill your life.

You need in any case a horde of developers or make it OpenSorce! (like Blender!)

This is the one thing that is keeping me from buying them, how on earth is there no support for AR desktop with atleast 2 even 3 screens? Why does mac get a release with this including 3dof? I can’t find an example anywhere for windows and it’s sad. This product has the highest potential for this at the moment, it’s even better than the quest pro, because 45 degrees is all you need for computing, and 49ppd is awesome.

Really thank you guys for pointing out these for us, we are listening to your voice and will take them into our consideration. I checked internally about the Windows support, it is in our timeline, but we want to make some breakthroughs, then it takes more time.

I think the same as you. I think virtual 3 desktop is very appealing. Also the hardware of nreal air is awesome too.
Currently I am using my desktop with CloudXR + SteamVR. However this rely on the smartphone Nebula, so the battery time is too short. Also sometimes the connection is unstable.

I am so glad to hear that Windows support is at least in their timeline.
I hope it is coming out soon at least in this year…
Can you share what is the challenges and the expectation of due date?

I think nreal’s strategy on SW development has serious problems. Nreal is fundamentally a HW company. Therefore they must have many challenges in manufacture, and distribution all over the world. So I can agree with your opinions, that they have many problems to concentrate.

However they also have to provide SW of HW because their AR glass is the frontier product. HW only product is useless. It won’t work in any work place, and it will be an expensive toy. Therefore NReal have to concentrate on SW development more at this point. In these days, nreal’s HW delivery is the top class on AR industry (at least in Korea.). I am sure there is no other company can manufacture and distribute new AR glasses for next a year.

So I think they don’t need to concentrate all company’s ability to HW manufacture and delivery. Also I think there is so few people in SW department in Nreal (perhaps less than 10 developers). So SW decision is not elaborated and no careful.

BTW, I am so glad that Nreal try to communicate with community.
So I strongly request to open source the HW APIs.

A user on reddit told me that they have been using the windows beta. Not sure how true this is but if it is then it might be closer than we expected, or maybe they could open it up to more of us for beta testing?

I really don’t like macbooks, mostly due to the keyboard and unfamiliarity to the OS, and the nreal air have been the only device in my life to ever make me consider a macbook. I’m not going to get one though ha, but still that’s how good the experience is. Please make the windows version the main priority, I think having both major OS supported would be a bigger impact that more phones, at least for now.

I imagine it is because that while “Windows currently has a 5 times larger pie than MacOS.” they also have very inconsistent hardware specifications. Same problem as in Android. While more android’s are in use, only the flagships have any hope of running nebula.

By targeting M1 Macs the developers can be assured that everyone has at least m1 capable graphics, which are a pretty good baseline.

Hi, thanks for your suggestion. We do notice that many users are requesting Windows version of SDK, we are doing the related work, please give us some time.

Yes lack of Windows Nebula is the main reason I haven’t purchased NReal Air. Also I have a UK Samsung s10e and as prefer smaller phone don’t want to upgrade, but it’s not compatable. I fear that nreal, having spent 3 years+ on these glasses and still having no desktop software and only limited phones to take advantage of the 3dof, means a competitor will get there first, leaving them high and dry. They really ought to either out source or open source it.

Maybe they should just strip out all the 3dof stuff and sell a cheaper version at $199 with just mirror mode = NReal Mirror, until they can properly support 3dof on all devices?

Additionally they could expand on the NReal Light to handle the window pinning within the actual glasses. So still just a basic display port mirror from the device pov and so requiring no additional nebula software but the glasses handle cropping in as much of the display as should be shown dependant on head position. At least this way it would have mass 3dof compatability with any video input and minimise lag. Just adding a button on glasses to toggle between pinned and mirror would suffice.

I fear that nreal, having spent 3 years+ on these glasses and still having no desktop software and only limited phones to take advantage of the 3dof,

Me mind too, and i don’t understand why he doesn’t Open Sorce it! I will make his Money with Hardware and Certificated Software Approving System, and don’t have the Cost and Development Time on his shoulders.

They biggest competitor is IBM with Lenovo ThinkReality A3, damn Weak up, if he like goes Costumer Market your Product are Dead! His Price isn’t mutch higher than you Nreal Light, and Already have Windows Support.

Dudes make Hardware and let do the Community Programming for you.
Create a Controller, Body Tracker, Wireless

Yeah, NReals hardware is great. Nebula is just a glorified web browser at this point for android. The sdk only works with unity. Please just focus on open drivers and documentation so people can make usefull apps. Theres so much potential in the hardware and plenty of exisiting platforms like steamvr that could be adopted natively instead of streaming over XRcloud which is far from a great experience. As others have said i really dont understand the push for Mac while Apple is working on their own competitor which im sure once it comes out nreal will never be able to compete with apples software integration.

Two weeks again goes, no reply / no news.
Please give us some, Roadmap or so!

I agree ^ we want this to succeed let us help make it happen!

We are doing internal work on Windows now, there is progress. I cannot give a specific timeline for it currently. If we complete all compatible works, we will give you guys a date before the full test. Thanks for your understanding.

My use cases are 3DoF for productivity and 6DoF for pro apps.
Will not be able to purchase next gen until both are supported on Windows independent of Host CPU i.e. no lock-ins with Qualcomm etc.

@nreal-dev
Am I correct assuming this conversation is about 3DoF on Windows?
Is CPU independent 6DoF on Windows planned for next gen?
Do we have to wait for Intel Meteor Lake with AI instruction extensions and AMD counterpart for 6DoF to happen on Windows?